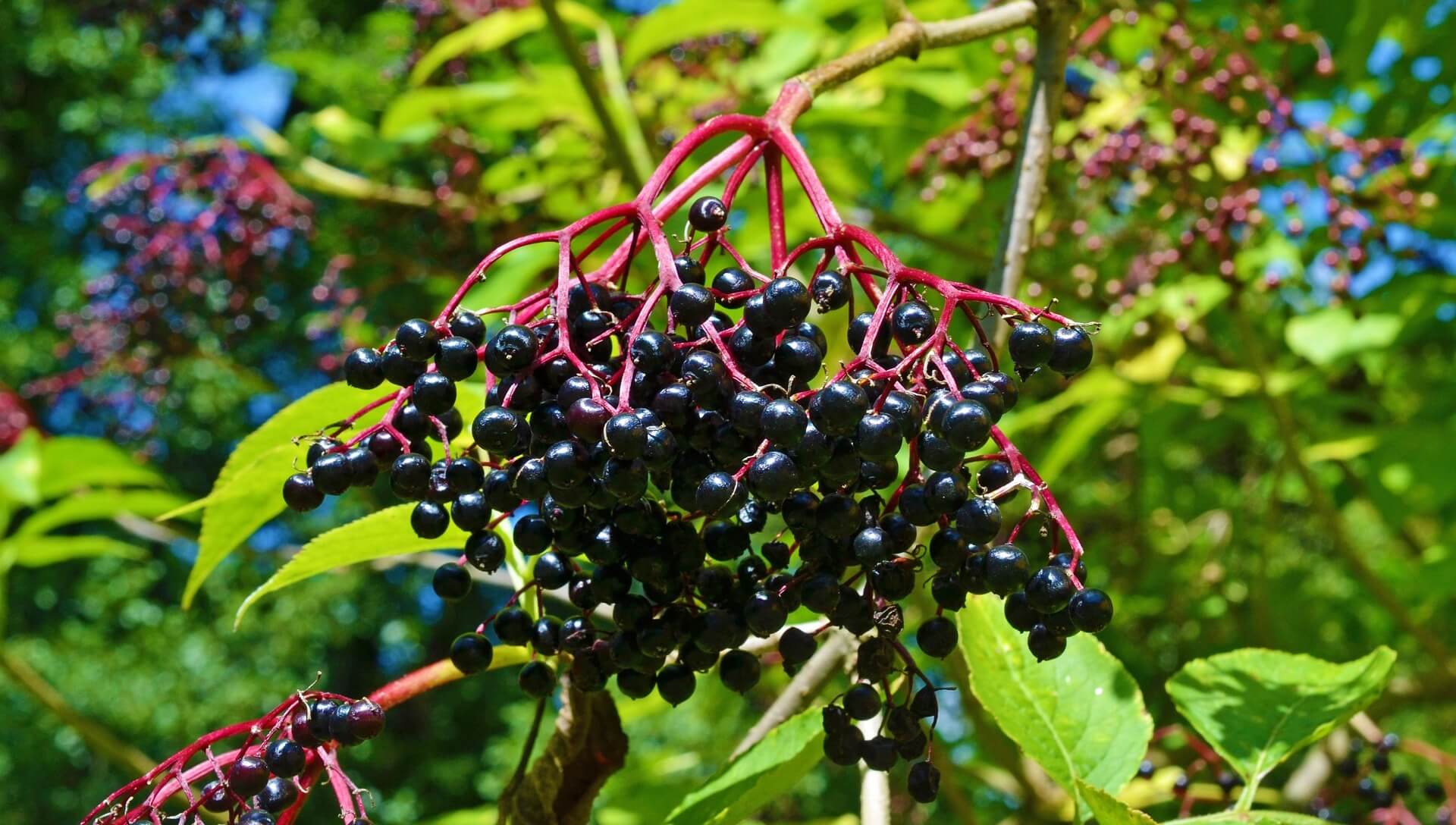 The elderberry has a long history of medicinal use. It was even considered by Hippocrates, the “father of medicine”, as his “medicine kit”, due to how well it cured a variety of health conditions. There are even elderberry-based medicines that date back to Ancient Egypt, crazy huh?

This antiviral superfruit contains powerful antioxidants found in greater amounts than blueberries, lingonberries, goji berries, and blackberries (2). It’s no wonder, then, why so many people have flocked to this fruit to help prevent seasonal flu and other related viral illnesses.

The active compound in elderberry that makes it a potent antiviral is called none other than antivirin. This compound is found in the proteins of the black elderberry and contains strong antiviral properties that are strong enough to stop the flu virus in its tracks (3).

In fact, when used within the first 48 hours of the onset of flu symptoms, elderberry extract has been found to reduce the duration of the flu and relieve symptoms an average of four days sooner (4). During the 1995 Panama flu epidemic, the government even used elderberry to fight the flu.

It has even been found to help protect against viruses like the coronavirus. According to one study, “elder extracts demonstrate an inhibitory effect on infectious bronchitis virus (IBV), a pathogenic chicken coronavirus, at an early stage of virus infection.” (5).

2. Elderberry for cold and flu

As mentioned above, elderberry is a potent antiviral strong enough to prevent or eliminate the flu virus.

Studies that have examined the effects of black elderberry used the trademark sambucol syrup. In a randomized, double-blind, placebo-controlled study, Sambucol reduced the duration of flu symptoms to 3-4 days (6).

Elderberries contain compounds called anthocyanidins, which are known to have immune-boosting effects. A 2016 study published in nutrients showed that elderberry supplementation helps reduce the duration and symptoms of a cold in air travelers (7). Travelers who used elderberry from 10 days before travel to four to five days after arriving abroad experienced reduced cold symptoms and a two-day shorter average duration of their colds.

Black elderberry has even been shown to be effective against bird flu, specifically the Panama B strain. In one study, those treated with standardized elderberry extract, Sambucol (SAM), experienced significant improvements in their influenza B symptoms, more than 93.3% of them. Complete cure was achieved within 2 to 3 days in nearly 90% of the SAM-treated group and within at least 6 days in the placebo group (8).

In another 2009 study, researchers randomized patients into two groups: one group was given four daily doses of 175 milligrams of proprietary elderberry extract, and the other group was given a placebo daily for two days. The extract-treated group showed significant improvement in almost all flu symptoms, while the placebo group showed no improvement. The researchers concluded that the extract was effective in controlling influenza symptoms (9).

A most recent study published in 2019 discovered that the unique phytochemicals present in elderberries immediately immobilize the flu virus. They do this by blocking the virus from entering, or even attaching to, our healthy cells, when taken preventively during flu season.

Phytochemicals in elderberry were found to prevent the virus from reproducing, even if the flu has already taken hold. Symptoms were found to clear up in 48 hours.

The researchers turned commercially grown elderberries into a juice serum and applied it to cells before, during and after they were infected with the influenza virus.

The phytochemicals in elderberry juice prevented the virus from infecting healthy cells, but were even more effective in inhibiting the virus at later stages of the influenza cycle when cells had already been infected with the virus.

“This observation was quite surprising and quite significant because blocking the viral cycle at various stages has a higher chance of inhibiting viral infection.” explained Dr Peter Valchev.

“In addition to that, we identified that the elderberry solution also stimulated the cells to release certain cytokines, which are chemical messengers that the immune system uses for communication between different cell types to coordinate a more efficient response against the invading pathogen.” said the director of the center. , Professor Fariba Deghani, told ScienceDaily.

3. It can help prevent cancer

Black elderberry has a potent effect on the immune system, making it a great antidote for those with suppressed immune systems, cancer, and AIDS (10).

A study published in the Medicinal Food Magazine compared the anticancer properties of European and American elderberry fruits. Both plants possess strong antioxidant capabilities, but the American elderberry has not been as readily cultivated and promoted as its European counterpart.

The study tested extracts of both berries for their anticancer potential. Both extracts showed significant chemopreventive potential. Additionally, elderberry extract inhibited ornithine decarboxylase, an enzyme marker that is linked to the promoting stage of cancer formation (eleven). This suggests that elderberry could be used as a natural cancer treatment option.

As a result of the modern diet and lifestyle, more and more people are prone to autoimmune diseases, such as allergies. Fortunately, black elderberry has been used to treat hay fever-like symptoms. It is also said to act as a detoxification aid by improving liver function (12). The anti-inflammatory effects of black elderberry also help reduce the symptoms that accompany allergies, as well as strengthen the immune system.

Both the flower and the berry of this plant have been used traditionally to treat diabetes, and now research has confirmed this. Black elderberry has been found to stimulate insulin secretion, which ultimately lowers blood sugar levels. It also stimulates glucose metabolism, a process that is often inhibited in diabetics.

One study investigated the insulin-like and insulin-releasing actions of black elderberry in vitro. found that an aqueous extract of elderberry significantly increased glucose transport, glucose oxidation, and glycogenesis without added insulin (13). Glycogenesis is the process by which excess sugar is removed from the bloodstream and passes to the muscles and liver; Ultimately, it helps maintain normal blood sugar level.

Being an anti-inflammatory, elderberry is undoubtedly a great natural remedy for relieving sinus pressure and infections. One study used a proprietary blend called Sinupret, which contains elderflowers. They used Sinupret to treat bacterial sinusitis along with an antibiotic and a decongestant. Study participants who took the combination fared better compared to those who did not take Sinupret at all (14).

Historically, the flowers and leaves of the elderberry plant have been used to relieve pain, swelling, and inflammation (fifteen). This is likely due to elderberry’s high content of antioxidants, which naturally fight free radicals that are a major factor in the inflammatory response.

Where to buy elderberry extract

The most commonly used elderberry extract is sambucolhowever, I suggest using something a bit more natural like Nature’s Answer Alcohol-Free Sambucus. It has fewer ingredients and contains a highly extracted formula.

There are other brands, but Nature’s Answer is my favorite (I use their other herbal blends, and they work quite well!).

If you are unsure about the health benefits of elderberry extract or how to properly dose it to alleviate certain health ailments, please consult with a local naturopathic physician.