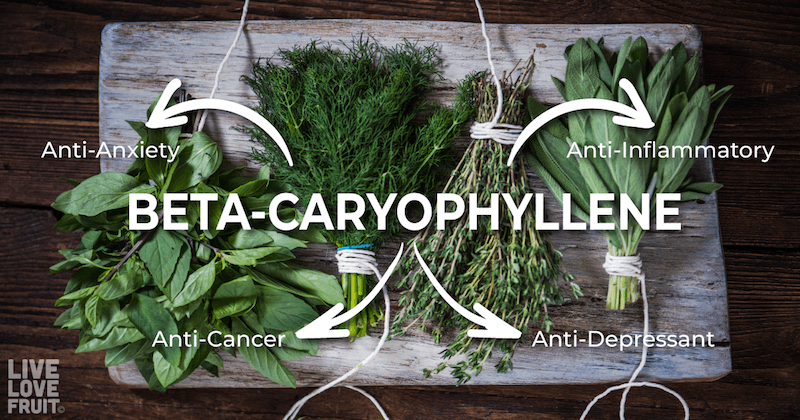 Cannabis contains beneficial cannabinoids that help heal the body, but they are not unique to cannabis. In fact, cannabinoids and cannabinoid-like substances that stimulate the endocannabinoid system (ECS) are very common in plants other than marijuana.

The beauty of these plants is that they don’t get you high. Almost all CBD extractions from cannabis contain a small proportion of THC. This is also true for cannabis strains that are marketed as high-CBD strains.

Therefore, those who prefer to stay away from the hallucinatory effects of THC can make use of the cannabinoid-like elements in non-marijuana plants, such as oregano and black pepper.

What is the Endocannabinoid System?

The endocannabinoid system (or ECS) is a vital molecular system to help maintain homeostasis in the body. Homeostasis is the perfect internal balance necessary for optimal health. Due to its crucial role in homeostasis, ECS is found abundantly in the animal kingdom (1).

There are two main cannabinoid receptors: CB1 and CB2. CB1 receptors are found most abundantly in the brain and spinal cord (they are also the receptors that interact with THC to get people high), but they can also be found in different parts of the body. CB2 receptors are located throughout the body, rather than being located in the nervous system.

Other cannabinoid-like compounds also interact with the ECS, which I will describe later.

The cannabinoid-like compounds described below are found abundantly in the plant food kingdom (particularly beta-caryophyllene).

I thought I’d include this one here, because there are a couple of foods that increase the production of this molecule and help prevent it from breaking down. Anandamide is not a compound similar to cannabinoids and is, in fact, an endocannabinoid (like the body’s version of cannabis).

Our mood, happiness, ability to regulate stress and anxiety are regulated by the ECS. When anandamide levels are disturbed, one could end up with mental health disorders, from schizophrenia to depression (2).

Anandamide is produced by the body and then rapidly broken down by the FAAH enzyme. Studies have found that in individuals with a genetic mutation that lacks the FAAH enzyme, their happiness levels are considerably higher than the average person (3). So of course consuming foods that block this enzyme would promote happiness, right? Right!

Cocoa deactivates the FAAH enzyme, which means more floating anandamide in the brain (4). Black truffles also produce more anandamide in the body than enzymes know what to do with, so people may feel more euphoric after consuming them (5).

Beta-caryophyllene (BCP) is an aromatic sesquiterpene that selectively interacts with the CB2 receptor, blocking chemical signals that lead to inflammation. It does not bind to the CB1 receptor, making it favorable among those who wish not to succumb to the mood-altering effects of cannabis (6).

According to Dr. Jürg Gertsch, BCP is powerful enough to have an impact at normal dietary levels. “If someone eats a lot of herbs that contain essential oils, then they may be able to get enough to reach a therapeutic dose,” Gertsch said (7).

In a study led by Gertsch, BCP was used to treat mice with swollen paws. In about 70 percent of cases, small doses of BCP were enough for the inflammation to subside (8).

BCP has been found to increase longevity, improve the outcome of stroke, protect the cardiovascular system and brain, help prevent Alzheimer’s and Parkinson’s disease, as well as reduce depression and anxiety. It can also prevent cancer and improve bone density (9).

Herbs like clove, black jack, copaiba, black pepper, and rosemary remain some of the highest BCP-containing plants around.

Cannabigerol or CBG is considered a minor cannabinoid, but with great benefits. CBG is believed to be particularly effective in the treatment of glaucoma because it helps to lower intraocular pressure (10). It also helps reduce inflammation (eleven), and has shown great promise as a cancer fighter by blocking the receptors that cause cancer cells to grow (12).

There are many different plants that contain compounds called cannabimimetic, which means that they literally mimic the biological activity of classic cannabinoids (although they don’t share the same structure). They generally interact with CB1 receptors, but you won’t feel much of a psychedelic effect unless you take them in large amounts.

5. Derivatives of chroman and chromene

Two cannabinoid-like compounds, anthopogocyclolic acid and anthopogochromenic acid (derived from chroman and chromene), have been isolated from the Chinese medicinal plant Rhododendron anthopogonoides. This plant also contains three related compounds known as synthetic analogues of cannabinoids: cannabichromene (CBC) type, cannabicyclol (CBL) type, and cannabicitran (CBT) type (13). According to research, the essential oils extracted from this plant can kill anything from staph infections to cancer cells (14).

Cannabinoid-like compounds known as N-isobutylamides act on the CB2 receptor, making them powerful pain relievers and inflammation fighters. The Amazonian plant known as electric daisy contains N-isobutylamide, which is a well-known and widely used remedy for toothaches. It’s so powerful, in fact, that some doctors are even using it to help with painful scenarios like impacted wisdom teeth (fifteen).

Perrottetineinic acid is an unusual type of cannabinoid produced by the native New Zealand liverwort plant. This cannabinoid-like compound is closely related to THC and is known to treat bronchitis and relieve gallbladder, liver and bladder problems (sixteen).

Using the subcategories above, the following is a selected list of all non-marijuana plants that contain cannabinoid-like compounds.

5. Derivatives of chroman and chromene

The following plants can be eaten (in the case of spices and herbs like coriander and parsley), or applied to areas of the body that need a little extra healing (in the form of essential oils, like copaiba. Always be sure to dilute in a carrier oil such as jojoba oil before applying it to the body).

Some of these herbs can also be drunk as a tea or as a tincture. If you use any of the above herbs or foods, be sure to follow the instructions on the purchased supplement, or consume as you would for herbs like parsley and cilantro.